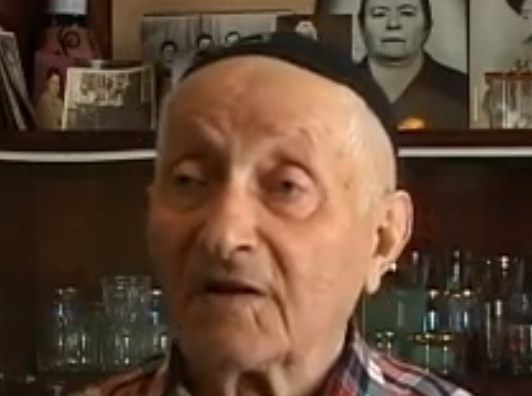 Veniamin Feldman grew up with three siblings. His father, a miller, hired a religious teacher during his childhood. His father was killed by bandits during the Civil War in 1919. Subsequently, he moved to Luhny and attended religious school from 1919 to 1923. As an adolescent, he worked as farmer for Christian families. He was married in 1930. During World War II, he served in the Red Army.

Veniamin explains in this clip, how a group of bandits took his father to the woods and killed him. Boots were hard to come by in 1919 Ukraine. Even in the north, where almost everyone seemed to work in the felt and leather industries, good winter boots took time and money to obtain.

One day in January 1919, in the midst of the Civil War (1917-1922), Veniamin explained, a “Pole” who had been a warrant officer in the tsarist army and now led a small band of anti-Bolshevik fighters, showed up at their house and demanded leather for boots.

The “Polish” warrant officer was probably Aleksei Kozyr-Zirko, a warlord from eastern Ukraine possibly mistaken for a Pole because of the Galician accent he adopted. For three weeks in December 1918 to January 1919, Kozyr-Zirko reigned over Ovruch and its district, looting Jewish property, stripping Jews of their boots and clothing, degrading and humiliating Jews, and ultimately murdering them with the type of sadistic violence normally associated more with the Holocaust than the pogroms.

The Volunteer Army, commonly known as the Whites, was made up mostly of conservative officers from the tsarist army. They opposed the Red Army's efforts to extend the Revolution and fought for the maintenance of the rights of property owners and priests. During the battles, attacks on the Jews among other minorities, were quite common. One survey counted 688 cities, towns and villages affected by pogroms. Many of these locales suffered multiple pogroms, as armies and brigands came and went. The pogroms were attributed most often to Ukrainian nationalists, though the White Volunteer Army is said to have been responsible for about twenty percent of the attacks, with Veniamin’s father being one example of the latter.