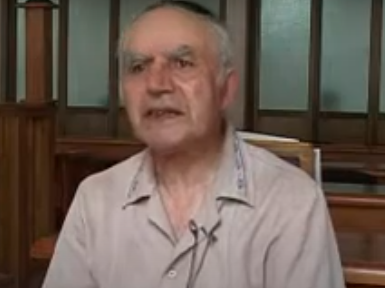 Lazar Burshtein was born in Goworowo (Poland; Yiddish: Govrove) in 1929, where he lived until the 1939 German invasion of Poland. He had five siblings and went to religious school (kheyder) and then studied at a Polish school. When the Germans invaded Poland in 1939, he fled with his family into Soviet occupied Belorussia, first to Bialystok and then to Bobruisk, where he lived until the 1941 German invasion of the Soviet Union. After He then fled with his family further east toward the Urals, where he lived in evacuation in Chusovaya for the duration of the war, during which time his parents died. There he met some other Jews from Zhytomyr, and decided in 1944, to settle with them in Zhytomyr.